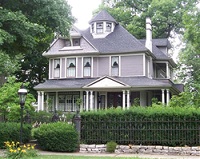 About the District
Included in this area are the near downtown streets of Seventh, Eighth, and Ninth bordered roughly by Jackson Street on the east and Henry Street on the west.

The Historic West Eighth Street District was designated in August 1981. This district is comprised of homes, churches, parks, and commercial and public buildings, that were constructed during the last decade of the 19th century and first decade of the 20th century.

There are approximately 200 structures within this district and they are made up of styles that represent cottages of various styles, Queen Anne styles, Free Classic, Colonial Revival styles, and a good collection of notable Italianate homes. Most of these homes were constructed during the gas boom in the late 1880s and were homes to very prosperous residents.

Funk Park
Funk Park is one of the parks in the West Eighth Street District for the neighborhood to enjoy. A large gazebo, brick path, and water fountain are the focal points for local residents. A variety of trees and flowers surrounding the park add to this beautiful setting. Several weddings and small engagements have occurred at this site in the past. It is located on Eighth Street between Chase and Lincoln Streets.

Neighborhood Association
In the early 1970s, a group of concerned home and business owners established the West Eighth Street Neighborhood Association for the purpose of improvement and preservation of the properties in the Eighth Street area. They meet the third Thursday of each month, usually in the home of a local neighbor, to socialize, as well as to provide information about downtown community events and items of interest to the downtown area.

The association has also been involved with promoting awareness of our local heritage. They have hosted the Gas Light Festival on an annual basis for the past 20 years. It includes a tour of several historic homes in the area, a week end of social activities, tractor rides, readings regarding historic events in Anderson, and plenty of food and festivities.